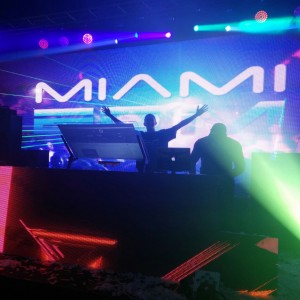 Screens specifically designed for use in video walls usually have narrow bezels in order to minimize mullion, the gap between active display areas, and are built with long-term serviceability in mind.[1] Such screens often contain the hardware necessary to stack similar screens together, along with connections to daisy chain power, video, and command signals between screens.[2] A command signal may, for example, power all screens in the video wall on or off, or calibrate the brightness of a single screen after bulb replacement.

Reasons for using a video wall instead of a single large screen can include the ability to customize tile layouts, greater screen area per unit cost, and greater pixel density per unit cost, due to the economics of manufacturing single screens which are unusual in shape, size, or resolution.